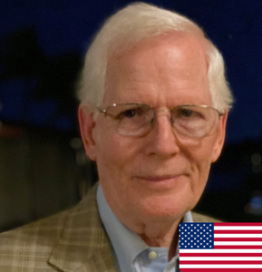 Robert M. Bauman is president and CEO of Trusted Systems, Inc. Mr. Bauman’s career spans 50 years in the computer and security industries. He earned a BS in Mechanical Engineering from Wisconsin in 1969 and started with GE as a programmer and sales engineer in process computers, eventually specializing in telecommunications and teleprinters.

In 1973 he joined Hazeltine, a pioneer in video display terminals.  After eight years in Silicon Valley as their top salesman and regional manager, he left to start a rep and systems integration firm in Phoenix.  His business expanded into distributed networks becoming a VAR for Sun Microsystems.

In 1986, while at Los Alamos National Labs, Mr. Bauman invented the “computer safe” to protect electronic devices while operating closed door and on-line. As a result, he founded Trusted Systems, Inc. in 1990, and in 1992 received the first Government approval for an Information Processing System (IPS) Security Container to protect classified information.

Since then, through innovation and several patents, Mr. Bauman has expanded Trusted Systems’ product line to incorporate a defense in depth strategy to provide environmental, physical, emanation, EMP and access control protection for the military, the intel community and executive branch agencies, most notably the Department of Energy.  This relationship evolved throughout the National Lab network based on his work at Los Alamos.

His interest in energy, power generation, and the grid was sparked by the eminent threat posed by an electromagnetic pulse (EMP), whether an attack from a high-altitude nuclear explosion (HEMP), a directed energy device, or a natural solar storm emanating from the Sun.  Regardless of the source, an EMP event would damage or destroy all electronics in its path including computer and communication systems, and our vital power grid.

In 2004, the EMP threat was introduced to Mr. Bauman by Congressman Roscoe Bartlett.  Congressman Bartlett was instrumental in establishing the EMP Commission in Congress to raise awareness of the vulnerabilities in the power grid following an EMP event.  Mr. Bauman’s response was to expand his company’s product line to include EMP hardened shelters to shield critical electronics from this form of attack.

Since then, Mr. Bauman immersed himself in the topic of EMP, honing his understanding of the vulnerabilities associated with an EMP attack and the countermeasures necessary to protect the Grid. His collaboration in the industry includes membership in the FBI-sponsored INFRAGARD and its EMP Special Interest Group. In addition, he was appointed as a technical advisor to the Congressional EMP Caucus Task Force on National and Homeland Security.  It is his intimate knowledge of National threats that motivates Mr. Bauman to promote hardening of the grid to the EMP Commission and directly within DOD, DOE, and DHS.

Concurrent with his expertise and sense of urgency for protecting the grid from an EMP attack, Mr. Bauman turned his attention to the nuclear power as a preferred long term baseline energy source.  He applied his same un-biased, grassroots advocacy to advancing the cause of the next generation small modular reactors (SMRs) on the Hill.  Eventually, his expertise and solutions-based approach was recognized in the aftermath of the Fukushima disaster, where he was called on as a Congressional technical advisor to senior leaders from Japan to explore explosion-proof alternatives.

Mr. Bauman’s interest and influence did not stop there as he recognized an EMP event is not the only threat.  A self-inflicted threat looms over the horizon from environmental extremists and their obsession over CO2 emissions, the resulting demonization of fossil fuels, their naïve overindulgence of wind and solar as a viable option, and the dismissal of the best long-term, scalable alternative, nuclear.

Knowing the environmentalist threat to a reliable grid and its dependable power sources, Mr. Bauman jumped into the arena of the climate debate through the Heartland Institute’s 2011 ICCC-6 Conference, and subsequently, each conference since.  In 2012, Mr. Bauman was invited to join The Right Climate Stuff (TRCS), an independent climate research group made up of retired Apollo engineers. TRCS is a think tank tasked with presenting empirical data analysis that challenges the disinformation about CO2 emissions and climate change. Mr. Bauman has since joined the CO2 Coalition, CFact, and other like organizations, to promote ”climate realism” to counteract the religious fervor of the climate alarmists.

A born entrepreneur, Mr. Bauman still runs his company, now the industry leader in network physical security, and plans to do so for the foreseeable future.  His mission is to continue to do his part to protect the country he loves, its information assets and networks, the power grid and its energy resources, to preserve it for generations to come.