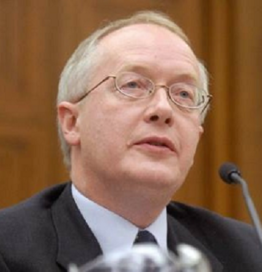 Myron Ebell is director of the Competitive Enterprise Institute’s Center for Energy and Environment, which is one of the most-effective advocates for free-market environmentalism. He also chairs the Cooler Heads Coalition, an ad hoc coalition of over two dozen non-profit groups, including The Heartland Institute, that led the successful decades-long fight to defeat cap-and-trade legislation and more recently led the effort to convince President Trump to withdraw from the Paris Climate Treaty.

Ebell led the Trump Presidential Transition’s agency action team for the Environmental Protection Agency.  His involvement in the transition led to public protests and marches in several cities across the United States and Europe.  In one of countless fundraising e-mails and letters from environmental pressure groups, Sierra Club President Michael Brune wrote that “Myron Ebell is … one of the single greatest threats our planet has ever faced.”

A native of Baker County, Oregon, where he grew up on a cattle ranch, Ebell earned degrees at Colorado College and the London School of Economics (where he was a student of the renowned political philosopher Michael Oakeshott) and did graduate work at the University of California, San Diego, and at Peterhouse, Cambridge University in philosophy, history, and political theory.

Joe Bast, then-president of The Heartland Institute, presented Ebell with the Speaks Truth to Power Award at the Twelfth International Conference on Climate Change on March 23, 2017.