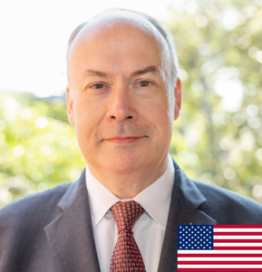 Jeff Clark is the former President Trump-selected and Senate-confirmed Assistant Attorney General of the Environment & Natural Resources Division of the U.S. Justice Department. From 2020-2021, Jeff was also named and simultaneously served as the former Acting Assistant Attorney General of DOJ’s Civil Division. In this capacity, by the end of 2020, Jeff was responsible for supervising approximately 1,400 lawyers at DOJ.

Jeff carried out a deregulatory agenda by helping to restrict DOJ’s powers to seek civil penalty relief Congress did not adopt and by shepherding many of the Trump Administration’s most controversial regulations through the courts.

Jeff also argued many of his own cases, achieving about an 80% win rate in the Environment Division and about a 67% win rate in the Civil Division. Jeff has argued at least one appeal in all 13 federal circuit courts of appeal. Jeff defeated the “Climate Kids” in their case in the Ninth Circuit, and was set to argue for the DOJ Environment Division the combined CPP repeal and ACE rule defense in the DC Circuit that became West Virginia vs. EPA Supreme Court. Jeff grew too busy in light of other late-arising duties running the Civil Division at DOJ at the end of the Trump presidency.

Jeff previously served as a Deputy Assistant Attorney General in the Environment Division during the Bush 43 Administration. Other than his stints at DOJ, Jeff spent most of his career as a partner at Kirkland & Ellis LLP, where he was an appellate litigator and administrative law expert, doing battle with many federal and state administrative agencies.  Jeff also served for nearly a decade as an adjunct law professor at the George Mason (now Scalia) Law School teaching two classes: law, science, and technology and environmental law.

Jeff graduated from Harvard University in 1989 with an A.B. in economics and Russian history, from the University of Delaware in 1993 with an M.A. in urban affairs, and from the Georgetown University Law Center in 1995 with a J.D. He clerked for Judge Danny J. Boggs of the U.S. Court of Appeals for the Sixth Circuit.

Jeff is currently senior fellow and director of litigation at the Center for Renewing America.